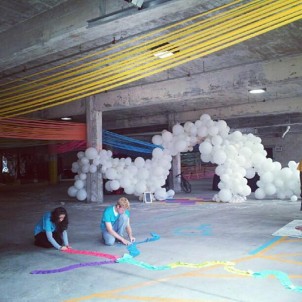 When given a brief to write a perspective piece on a specific design scene in America, the obvious thing to do would be to focus on the coastal cities of New York and LA or take a look at the Pacific Northwest’s vibrant creative community. However, in the name of discovery, I decided to eschew the obvious and look further afield, taking my research to Detroit, a city where changes are afoot in the design community.

Known as the Motor City, famed as a mid-century manufacturing powerhouse and celebrated as the birthplace of Motown, Ford and Techno, Detroit boasts a rich history deeply rooted in industry, design and music. 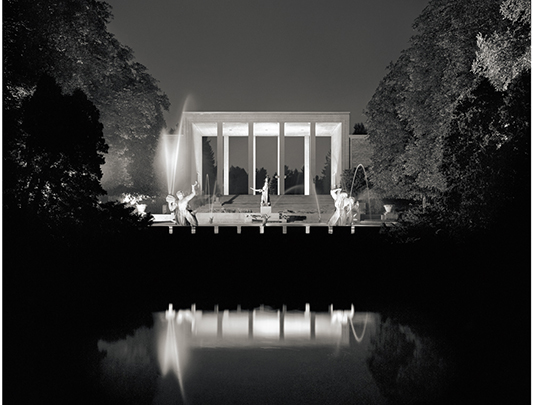 For those who are in any doubt of Detroit’s historical impact, an exhibition currently showing at the Cranbrook Art Museum demonstrates how design made in Detroit reshaped virtually every aspect of American life, from the furniture in homes and offices to the cars in the driveway. Called ‘Michigan Modern: Design that Shaped America’, the exhibition shows how an exceptional class of artists and designers who attended the Cranbrook Academy of Art in the late 1930s, including 20th century legends such as Charles Eames, Harry Bertoia, Florence Knoll, Eero Saarinen and architect Ralph Rapson, invented Mid-century Modernism in the unassuming Detroit suburb of Bloomfield Hills.

So where did it all go wrong? The race riots in the late 1960s and the collapse of the motor industry decimated the city and residents departed in their droves leaving behind a virtually empty landscape of skyscrapers, homes and factories. Today, the media would have us believe that Detroit is still an ex-industrial wasteland scattered with ruins that only serve as reminders of the city’s glorious past. Most recently it made headlines for becoming the largest-ever US city to file for bankruptcy, which hasn’t helped matters.

While this all paints an undoubtedly bleak picture, history tells us that it is often ex-industrial cities and neighbourhoods that give birth to vibrant creative scenes with their abundance of disused buildings and low rents. Shoreditch in London, Dumbo in New York, the cities of Eindhoven and Berlin have all proved this to be true by attracting a bright community of makers, artists and designers. Indeed, since its mid-century modern heyday Detroit has continued to nurture a strong creative community, but has never attracted much attention on the international stage, that is until now.

If you’ve been reading more and more about design in Detroit recently, it’s most probably down to the efforts of the Detroit Creative Corridor, an economic development organization dedicated to enhancing the collective potential of Detroit’s creative community and growing creative economy.

In 2011 the organization set up the Detroit Design Festival with the hope of providing a platform for Detroit-based creatives to share their work with a local and international audience. Creative Corridor Director Matt Clayson explains why the Festival was needed, “We’ve always been a very insular city, we’ve never looked abroad for best practices, different trends or how to share creative work in a more strategic way. Doing this is essential to the continued success of Detroit’s creative industries.”

The fruits of the Creative Corridor’s labour are reflected in the buzz that is growing around the city and evident in recent investments and funding that the Detroit has received. Recently, it was announced that The Detroit Works Project, introduced in 2010 by city officials as a long-term master plan for the city, will receive $150 million over the next five years from the Troy-based, Kresge Foundation to stimulate economic growth and help build infrastructure within Detroit.

So who is coming here? Clayson tells me, “Advertising and digital media agencies are beginning to really populate the downtown area. The architecture community lost it’s footing in the 90s but now there’s a new generation of architects producing strong work here. Product design is also playing an important roll in driving the new narrative about Detroit as a place where you can design goods, mass produce goods and mass market goods.” 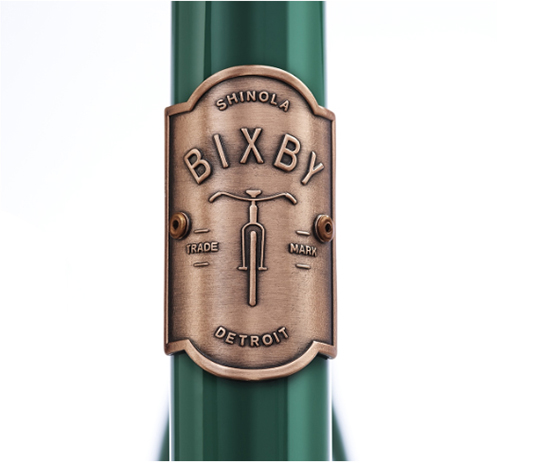 He cites recent start-up Shinola, a Detroit-based company making watches, bicycles, leather goods and journals, as a shining example. Set up by Dallas-based Bedrock Manufacturing, a venture capital firm backed by Tom Kartsotis, founder of accessory firm Fossil Inc., Shinola has a sharp visual identity and places an emphasis on its products being made in Detroit. “They’ve captured the narrative perfectly,” enthuses Clayson. “It’s moving away from depicting Detroit as Gotham City to portraying it as a sophisticated and thoughtful city that values craft and people.”

Another brand helping to market Detroit is Google. The tech giant recently used the city as a vibrant backdrop for it’s latest Google Maps ad, portraying it as an exciting and fast-paced metropolis for a new tech-savvy generation.

Abir Ali, one half of design duo Ali Sandifer, tells me that moving their furniture studio from Chicago to Detroit has boosted customer interest: “I know that people are paying attention to Detroit and for us, it’s served us well.” She reflects. “We didn’t know what to anticipate when we moved here. Our brand shifted from ‘Made in Chicago’ to ‘Made in Detroit’. We have had conversations with clients just based around the fact that we are in Detroit; they are very excited by it, more so than they were about Chicago. I think that’s because it’s unexpected. In many ways for some clients its part of the draw.”

However, while Detroit provides a landscape full of possibility for contemporary furniture manufacture, the consumers are often based elsewhere. Indeed Ali Sandifer’s enthused clients, who love the studio’s skillfully crafted ‘Made in Detroit’ furniture, are largely located on the east and west coasts with a few based internationally, indicating the importance of getting the work noticed outside of the city. 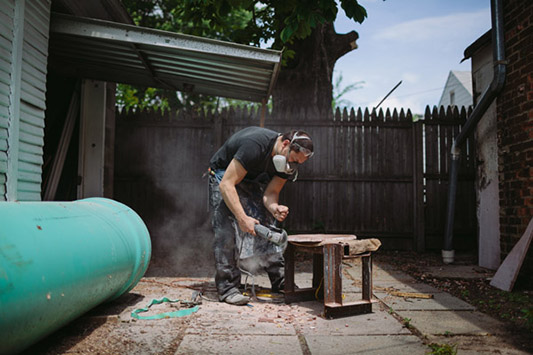 One Detroit designer who is doing just that is Jack Craig, a 2012 graduate of Cranbrook whose futuristic-looking stone and PVC ‘Pressed’ tables were scouted by Paul Johnson of the Johnson Trading Gallery, as was the work of another Detroit-based designer called Christopher Schanck. Craig and Schanck are now both represented by the JTG and Craig’s tables currently sit alongside Schank’s Alufoil furniture at the Gallery’s New York outpost in Queens. Both designers thrive on Detroit’s grittiness, and draw upon its rich pool of fringe manufacturers. Craig tells me, “The design scene parallels the people that live here – grass-roots, fringe, and resilient. We live and work in extreme conditions. These extremities lead to more radical and specific practice.”

With an impressive array of existing resources at the designer’s fingertips and a lively design community, Detroit appears to be an ideal base for young creatives. Matt Clayson explains, “There’s a lot going on here that rivals New York, Philadelphia San Francisco and LA. It’s just that it’s not readily consumable; you have to find it but once you find it you’ll discover a very active and vibrant city.”

Communicating this message to the rest of America however, is the challenge. “Most people in the US are confused about Detroit,“ says Clayson. “They don’t really know what to think about it because the US has never dealt with a city of this scale with this type of global impact and these types of challenges. They wonder how it’s possible to create such beautiful product in such a dystopian setting.”

By and large Detroit’s design scene receives relatively little press and it would seem that young American graduates are still much more likely to flock to the coasts to carve out a career in design rather than the Midwest. One unconvinced New Yorker tells me: “It’s very trendy to act like Detroit is like an exotic run-down version of Brooklyn but in reality, Detroit’s economic troubles are in need of serious national examination.” 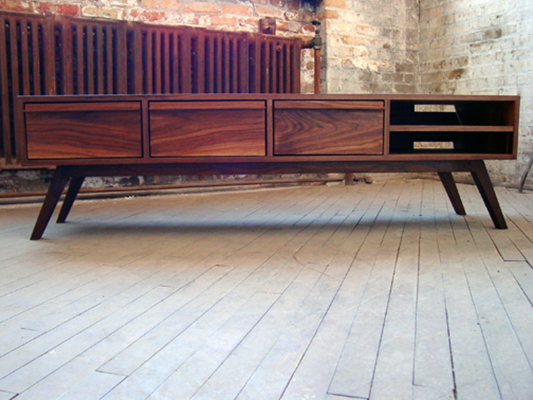 From within the city, Abir Ali is more hopeful: “I spent four years in Toronto and places that really value design and have a strong design culture, and I think that Detroit is definitely on a trajectory in the right direction. There is a growing energy here around design and what I’m hoping is that also, with time, there will be a rekindled appreciation of the value of design to the city that some of the other places (e.g. Portland, Toronto, NY, LA) just inherently understand. How long it will take remains to be seen.”